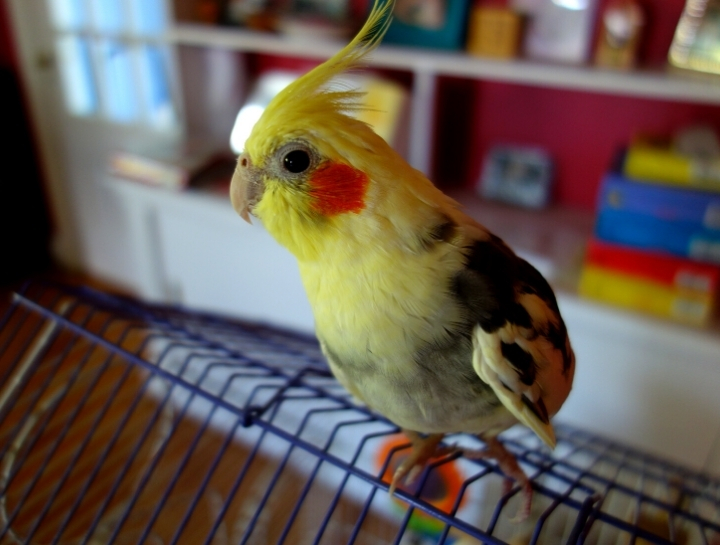 Unwanted egg laying is a common problem for pet birds. This happens when a pet bird not meant for breeding or production and often without a mate begins egg-laying activity. This is most common with cockatiels but can occur in other species.

Many owners do not know the sex of their bird or that birds without a mate can lay eggs. Birds are stimulated to lay eggs by many different signals in their environment. Understanding the natural history of these fascinating animals gives us insight into how their bodies work.

In the wild, animals face a trade-off between individual survival and reproduction. This means there is an energetic cost to reproducing. This trade-off is evident in many ways but the most important one for pet birds is that they have a limited amount of resources that they must divide between self-maintenance and reproduction.

Although we do not limit food and water seasonally for our pets, these mechanisms evolved over many thousands of years and is still part of how their bodies work. The decision to lay eggs is not a conscious one, but a biological one.

What cues from our human environment play a role in the biological "decision-making process" of reproductive effort?

Photoperiod (the interval in a 24-hour period during which an animal is exposed to light) plays a role. As spring approaches, day length increases and nights become shorter. In the wild, this is an ideal time to raise young because food supply increases dramatically. However, in our homes, birds are essentially exposed to longer days as we turn on lights inside, so that the bird's cycle can be out of sync with the seasons. This means they can undergo an egg-laying cycle at any time of the year.

Photoperiod is one of the most influential cues, but reproductive activity can be prompted by other things in the environment too. Day length is the strongest cue for temperate animals but bird species that originated in tropical climates, jungle or arid, where day length is relatively constant, have evolved responses to other cues.

A good example are zebra finches. These little guys must be able to lay eggs and raise young in a very dry climate where water and often food are scarce. These birds have constant stimulation from hormones to lay eggs often. There are seasonal droughts followed by a lack of food and resources that inhibit reproduction and the development of eggs. Budgerigars or parakeets, though very different in other ways, are similar in their reproductive strategies.

Some other forms of stimulation appear to be involved as well. Birds can be seen masturbating on toys, cage accessories or on people in the household. Mirrors or favorite toys can be objects of desire for the bird. The bird can be stimulated by other birds vocalizing in the home or merely by gently petting the bird. The bird must be comfortable in its environment and relatively free from stress so that a cycle can begin. Significant changes could upset the cycle. Because reproduction is such a complex process with so many inputs, owners must understand that controlling unwanted egg laying must include control of many aspects of the bird's environment and physiology.

In the normal situation, most psittacines or parrots will lay a clutch varying from 3-6 eggs, then sit on the eggs until they hatch. On occasion, a solitary bird may lay a clutch of eggs and then sit on them as if they were fertile. This is why many people recommend leaving the eggs in the cage with the bird. However, more frequently, the bird lays one egg after another, usually ignoring the eggs that are laid.

If the bird clutches and sits on the eggs and does not lay anymore while she sits on them (until she tires of this) they should be left in. Conversely, removing the eggs to eliminate the stimulus usually does not work by itself. Other means must be undertaken to stop this activity.

Egg laying is dangerous for the bird and excessive egg-laying can lead to calcium depletion which could result in egg binding (dystocia), weakness, fragile bones with a great risk of fracture and even seizures. If your bird is having difficulty with any of these issues then she will need to see the veterinarian right away.

Egg binding or dystocia can sometimes be difficult to recognize as the initial symptoms may be barely detectable. Technically egg binding is defined as failure of the egg to pass through the oviduct at a normal rate. Typically, most pet bird species lay eggs at intervals greater than 24 hours - zebra finches at one day and most parrots at 2-3 days. This is caused by uterine exhaustion secondary to chronic egg laying and or nutritional deficits such as calcium, vitamin E and selenium deficiencies. When an egg does not descend properly it can cause pressure on the pelvic nerves and causing rear limb weakness and even paralysis or shock.

What can pet owners do?

It is essential during egg-laying, desired or otherwise, that increased vitamins and especially calcium are added to the diet. If the bird is not using the cuttlebone or mineral block, it should be scraped over the food or provided with a mineral supplement in the water. If the bird is already on a balanced diet the dangers are not as severe. However, most birds are on unbalanced diets so the stress of egg laying can have grave consequences.

There are varying degrees of aggressiveness in the control of egg-laying behavior. It is preferable to start with the conservative measures first. If these fail then more involved steps should be taken.

Initially, change the photoperiod to simulate winter-long nights and short days. That means placing the bird in complete darkness for 16 hours and daylight for eight hours. This should be done for two weeks. A light cover is not enough; it must be dark. Usually placing the bird in a darkened room, away from the stimulations in the household, with a cover is adequate.

In addition, removal of stimulating toys and objects (mirrors, etc.) are helpful. Owner should not physically stimulate their bird by petting. If the bird is stroked and getting especially responsive then the handling should stop. This is a particularly difficult one to stick to. But remember, this is not a punishment. An owner is helping to decrease stimulation for egg laying. If there are other birds in the vicinity they need to be removed to prevent visual or vocal stimulation.

Changing the environment or surroundings of the bird by rearranging objects in the cage or placing it in a new location to throw her off can prove useful in control. These changes also serve to disrupt the status quo and take the bird out of its comfort zone. We do not want to cause anxiety but a little "good stress" will discourage egg laying. These environmental measures usually work if followed strictly. They can be instituted whenever the bird is showing sexual behavior - owners should not wait until egg laying has begun. It can also calm sexually aggressive male and female birds during their cycle.

If these measures do not work, the use of hormonal therapy may be indicated. Hormone injections such as Testosterone, hcG, and or Lupron among others have been quite successful in suppressing unwanted egg laying. Each hormone has its own protocol which is tailored to each specific species and individual’s response to therapy.

If all other measures fail, the last resort is a salpingectomy ("hysterectomy.") It is difficult and dangerous to remove the ovary so removal of a portion of the oviduct is usually effective. The advantage is that with surgery there will be no more eggs. However, as the ovary remains the bird will still display sexual behavior and the possibility exists that ovarian cysts may develop. There is also always a risk when surgery is performed. So the decision to undergo surgery should be weighed heavily.

Dr. Ellen Boyd is a veterinarian at Animal House of Chicago. She has spent years working with birds all over the West Coast and the Arctic Circle and researching avian endocrinology and reproduction.