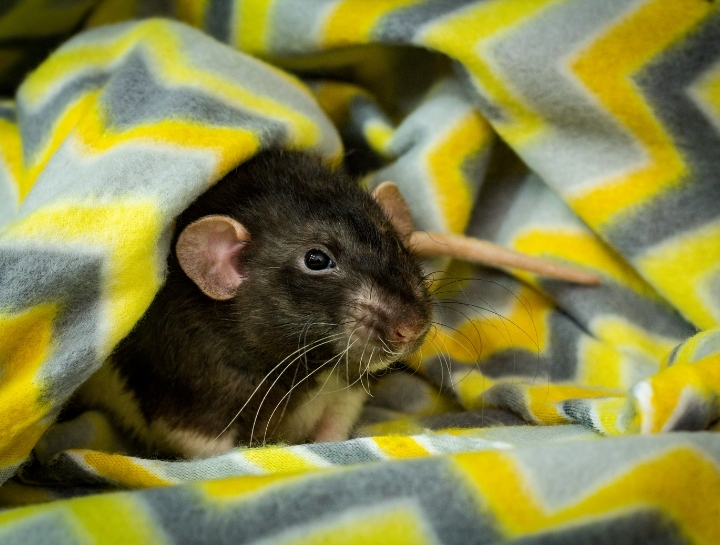 Benign mammary tumors can be removed surgically. The smaller the tumor, the more easily it may be to remove. Even very large tumors can be removed as long as your rat is determined to be in good preoperative health and appropriate measures are taken pre- and post-surgery to promote a complete recovery.

At Animal House of Chicago, we have surgically removed many tumors from rats well over two years old, so age should not be the only factor when considering surgery. Because mammary tumors and fibromas are typically under the skin, the surgery to remove them is not as invasive, as opposed to major surgery which involves entering a body cavity.

If all proper pre- and post-operative care is provided, these patients typically recover quite well. Even rats with coexisting health problems, such as respiratory disease and or congestive heart failure, appear to tolerate surgery well if their symptoms are controlled in advance with appropriate medications.

In all the female rats that we perform mammary tumor surgery on, we typically recommend having them spayed at the same time to help prevent future mammary and pituitary tumors.

In a few cases, owners have reported side effects from tamoxifen. The most common visible side effect seems to be hair loss. In some rats, it  also seems to cause fatigue. A less obvious side effect of tamoxifen is that it reduces the number of platelets in the blood. This interferes with the blood's ability to clot. If a rat on tamoxifen needs surgery, one should stop tamoxifen treatment for 2 weeks before the surgery to prevent excessive or potentially fatal bleeding.

In one study, leuprolide, which blocks the release of estrogen, was slightly more effective than tamoxifen against induced tumors, but it can be more expensive over time. Having rats spayed may, in the long run, be less of a financial burden.

A compound that has been shown to both treat and prevent cancerous mammary tumors induced (not natural tumors) in the lab is conjugated linoleic acid (CLA). This compound has even been shown to help rats lose weight! When given 75 mg a day, the body fat of rats was reduced by 23%. Another study found that DHEA given at a dose of 6-12 mg/day protected against induced cancerous mammary tumors. Other studies show that giving curcumin, an ingredient in turmeric, reduced tumors induced in the lab. They gave about 150 mg per day.

Shark cartilage can help to prevent the formation of new blood vessels, which tumors need to grow. You must start it as soon as you notice the tumor. It is not recommended to use it for tumors larger than a marble, because it can cause the tumor to die and then become necrotic. One can try 360 mg/lb per day mixed in food. It may work better when combined with co-enzyme Q-10 (try 0.2 mg/day), and tamoxifen.

Treatment with prednisone for some cancers other than mammary cancer may slow their growth.

There is some evidence that a high fat/high protein diet is best for cancer patients. It seems that a diet high in carbohydrates may be more easily used by tumors. You might try giving soy baby formula plus additional protein and B vitamins.