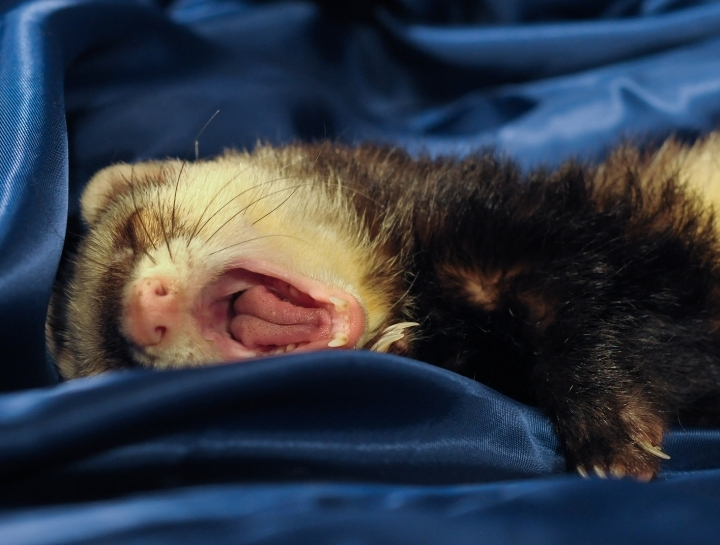 Ferrets get exposed to canine distemper virus via contact with airborne virus (most common) or contact with any body fluids of an infected animal. It is also possible that inanimate objects, such as shoes or clothes, can be a source of moving the virus from one place to another. In other words, you can bring CDV home if you are in contact with infected material in places such as the woods, a pet store or a pet shelter.

Fortunately, canine distemper virus is not a very stable virus and does not survive on inanimate objects for longer than a day. Ferrets have been known to contract CDV after receiving vaccines for CDV that are not approved for ferrets. There are vaccines approved for use in ferrets and their use is described below. The incubation period (the time between contacting the virus and showing clinical signs) for CDV is seven to 10 days.

Because it takes seven to 10 days to see clinical signs after exposure, a new ferret coming into a ferret shelter or home might be infected and can spread the disease before you know there is a problem. It is always good practice to quarantine any new ferret in the household or shelter for at least two weeks to watch for signs of CDV or other ailments/disease conditions.

Signs of canine distemper virus in the ferret may vary, but classically it starts with a mild conjunctivitis and green to yellow discharge from one or both eyes. A high fever of 104 degrees Fahrenheit or greater develops within a few days. The ferret may lose his appetite and become lethargic.

Other signs that can be seen include diarrhea and severe depression or bizarre behavior and seizures. The younger the ferret is when it contracts the disease, the more quickly it will develop central nervous system signs. Some baby ferrets do not develop any skin lesions at all, but develop a sudden loss of appetite, high fever, seizures and death all within a few days.

Making a diagnosis of CDV in ferrets depends on a combination of the clinical signs, positive antibody tests, and sometimes postmortem findings. Antibody titers for canine distemper virus can be performed and a positive result indicates prior exposure to the virus (either via infection or by vaccination). A fluorescent antibody test can also be performed. This is the microscopic examination of cells collected from the eyelid lining, mucus membranes or blood cells. It actually detects the virus. The test uses an antibody marked with a glow-in-the-dark compound so that when it attaches to CDV, it glows under the microscope. This test can help differentiate positive antibody titers from vaccine (which will not show viral particles) and infection. However, it is not uncommon for the fluorescent antibody test to be negative in the face of true infection.

Another illness resembles ferret distemper infection, and that is infection with human influenza virus. These infections differ from one another in that:

Thickening of the footpads is one way to distinguish canine distemper virus from influenza; influenza does not cause this.

Presently, there is no good treatment for CDV. However, along with extensive supportive care, people have tried immunostimulants, such as L-lysine and interferon. Vitamin A supplementation shows some promise as a treatment, according to a study at McGill University Health Centre Research Institute by C. Rodeheffer, V. von Messling, S. Milot, et al. Unfortunately, there is no one guaranteed therapy. If a ferret is severely affected, it may be best and most humane to consider euthanasia. Even severely affected ferrets can last for days in pain and discomfort.

Occasionally a mild or moderately affected ferret can survive the disease. These ferrets have to be treated with antibiotics, supportive fluids, assisted feeding and extensive nursing care. It may be beneficial to give them serum from ferrets that have been properly vaccinated against CDV and may have antibodies to the disease. Some recovered ferrets suffer permanent effects from the skin, foot or brain damage that occurs during the disease. The ferret's behavior may be altered significantly if the brain is affected.

If you have a group of ferrets that live together and one or more begin to show signs compatible with CDV, immediately separate the sick ones from the rest of the group. All ferrets in the group that are not showing signs of the disease should be immediately vaccinated with a ferret-appropriate CDV vaccine. This may reduce the incidence of disease in the group; however, ferrets that were not previously vaccinated and those that had a poor immune response to previous vaccination may still be affected.

CDV is not a stable virus and does not survive outside living tissue for very long. Common household cleansers, such as a 1:10 bleach solution, and disinfectants will effectively remove or destroy virus that remains in the environment after an outbreak.

As of September 2006, there is only one government-approved CDV vaccine for ferrets: Purevax Ferret Distemper Vaccine (produced by Merial). At times, this vaccine is unavailable due to demand exceeding supply. Production of Fervac-D (produced by United Vaccine), the only other approved ferret distemper vaccine, has been permanently discontinued by the manufacturer. As there are presently few safe and effective options, we are hopeful that a vaccine will be available soon whenever Purevax is unavailable.

Vaccination is the process of giving a weakened form of an infectious organism in order to create a response from the patient’s immune system that will not actually cause the disease but will create protection from the disease in the future.

No matter what species of patient, what infectious disease, or what kind of vaccine, not all patients will be protected against exposure after vaccination. This is termed a "vaccine failure," which can occur for a number of reasons. Some reasons for vaccine failure in ferrets include:

At this time it is recommended to have your ferret vaccinated for CDV on an annual basis. However there is evidence that the immunity to CDV may last up to three years. You and your veterinarian should discuss your ferret’s risk of exposure to CDV and the risk of adverse reaction to vaccination (see below), and an individualized approach to vaccine frequency should be determined for each ferret.

Ferrets at high risk should be vaccinated annually. These include those going to ferret shows, those with exposure to other species of CDV-susceptible animals such as in petting zoos and pet stores, those that travel, and those in a breeding program where new ferrets are frequently added.

Unfortunately anaphylactic (allergic) reactions to CDV vaccine are seen with all available vaccines. Reactions can also occur with rabies vaccinations, but are less common. The following statements underscore what we do and do not know about ferret distemper vaccine reactions

The majority of reactions are not life-threatening, but they can be uncomfortable for your pet and frightening to see. On rare occasions, the reaction can be fatal. Because we wish to avoid any serious health problems for your pet, we recommend the following guidelines when visiting your veterinarian for vaccinating your ferret.

The treatment for anaphylactic vaccine reaction depends on the condition of the patient and can include corticosteroids, antihistamines and fluid therapy. Most ferrets respond to treatment within an hour. Ferrets that have previously had a reaction to a vaccine may be pretreated with an antihistamine injection prior to receiving subsequent vaccines. While this is commonplace in clinical practice, it is still no guarantee that a reaction will not occur. Antihistamine pretreatment is not necessary for ferrets that have never experienced a reaction.

Canine distemper has not been eradicated from our pet population. In fact, in some areas, most notably those that are economically depressed or seriously overcrowded, CDV is on the rise in dogs. CDV also makes its rounds through our susceptible wildlife, which can keep the virus alive and well even in suburban areas of the country.

This painful and usually fatal disease is nearly 100 percent preventable with proper vaccination, and it is in the ferret owner's best interest to discuss options and risks for vaccination of their pet with their veterinarian. In most cases, the benefits far outweigh the risks for the pet.

Dr. Byron de la Navarre is Chief of Staff at Animal House of Chicago. He is an expert on exotic pet medicine and has lectured at the local, state and national levels.