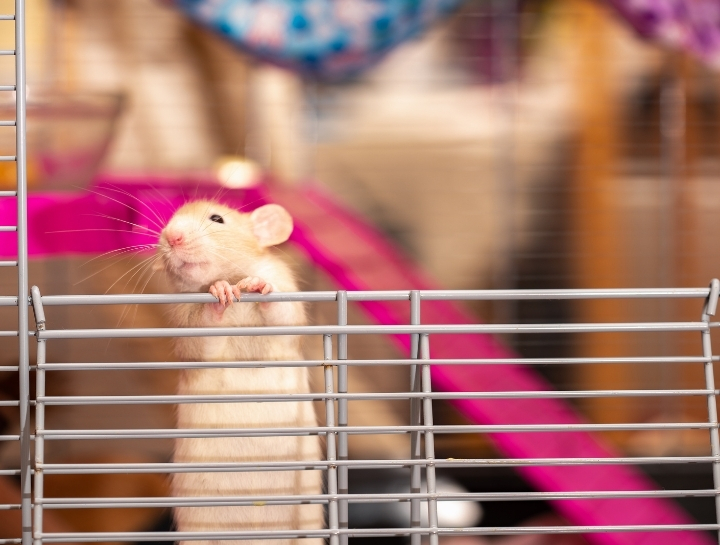 Along with respiratory infections, internal and external parasites, tumors are one of the most common health conditions that we see in rats at Animal House of Chicago.

There are two main types of tumors - benign and malignant.

Benign tumors are often encapsulated in a membrane and somewhat separate from nearby tissues. Although they can grow as fast or faster than malignant tumors, they do not usually cause as much damage and they do not spread to other parts of the body. Benign tumors can cause death by pressing on vital organs, bleeding internally, or by growing so large that the rat has difficulty moving around and cannot eat enough to support both the tumor and normal body functions.

In contrast, malignant tumors are usually more aggressive in their behavior in that they invade and damage nearby tissues. This form of malignant cancer may also spread to other parts of the body. Death can be the result of failure of damaged organs or mechanical interference with normal functions, such as eating. The symptoms of this form of cancer can include ulceration of the skin, an infected lump or abscess that will not heal, an ulcerated or bleeding tumor, a distended abdomen, weight loss, and or lethargy.

In some cases, cancer may involve internal organs, so symptoms may not be seen until the disease is well advanced and treatment of any kind may not be an option. This is one reason why it is very important for owners to give their rats a weekly physical exam at home and contact us or schedule an appointment with any questions or concerns.

Many benign tumors can be removed surgically. Depending on the size of the tumor(s) and location, surgery for some types of cancer can give a rat many more months of quality life. Some tumors may respond and temporarily shrink with medical therapy.

The most common tumor in female rats is the benign mammary tumor. These tumors are often stimulated by estrogen and usually occur after a rat stops ovulating at around 18 months of age. Unfortunately, about half of all female rats will get mammary tumors, and it is not uncommon for them to get several during their life either at the same time or one after the other. The most common locations for mammary tumors are in the armpits, in the abdomen or groin area, on the chest, and next to the vulva and anus. It is a good practice to frequently examine your rat at home, so you can identify tumors as early as possible.

Benign mammary tumors are usually distinct lumps just under the skin that may not be as firmly attached. When you touch the lump, you may be able to move it separately from the skin and underlying muscle. If a tumor feels tightly attached to the underlying tissue, this may be a sign that it is malignant, but some benign tumors may also feel attached because they are underneath connective tissue.

Benign mammary tumors can grow very large and very rapidly. They tend to have a round shape that tends to protrude. A malignant mammary tumor tends to be smaller and to not grow as fast. Ultimately the only way to properly diagnose the type of tumor is by biopsy, which usually means removing the mass and submitting it to a lab for evaluation.

Lumps in the Neck Region

A lump in the neck region of a rat may be an abscess, an inflamed salivary gland, a swollen lymph node, or a tumor.

A gland or lymph node can swell up overnight, and an abscess may also appear quickly. Tumors tend to grow more slowly. For a lump that develops rapidly, following a thorough physical and possibly lab exam by your veterinarian, they may use medications and these may help to cause a swollen gland or lymph node to shrink within 12-24 hours. If left untreated, however, it may develop into an abscess and this may then be more complicated to treat.

Another common type of tumor in female rats is an adenoma (benign tumor) of the pituitary gland, which lies beneath the brain. It is reported that this may be the third most common cause of death in female rats. It has been reported that the incidence in unspayed female rats has been 20% and in male rats 7%. Scientific studies show that having rats spayed reduces the chance of a pituitary tumor down to 4%.

A pituitary tumor is not as obvious as a mammary tumor as it grows inside the skull. As the tumor grows it presses on the brain and eventually causes neurological impairment. Symptoms may appear slowly, over a period of a few days or a few weeks, or quickly. These tumors are highly vascular and in some cases they can hemorrhage, which can cause acute severe symptoms, such as paralysis, seizures and death. It also seems that a slight hemorrhage from the tumor can cause symptoms that may later resolve.

For a typical pituitary tumor causing a slow onset of symptoms over a week or two, the usual first symptom is a loss of coordination, followed by some loss of function of the arms, legs and mouth. Sometimes the rat is hyperactive, and she may walk in circles and run into objects. She may also have other strange behaviors. Eventually, as the symptoms progress and the neurological impairment progresses, some become very infant-like and cuddly. At some point, all victims of a pituitary tumor will need to be hand-fed, and eventually they will lose the ability to swallow and must be humanely euthanized.

One symptom that is common with a pituitary tumor is a quite distinctive posture: first the front, then the hind legs are held out stiffly forward and cannot be flexed by the rat. When you pick the rat up, the arms and legs will often be held forward, although sometimes the hands are curled. Another behavior that is common is when a rat butts her head up against your hand when you pet her.

Neurological symptoms, including seizures, a head tilt, circling, and lethargy, can also have other causes, such as a stroke, toxins, encephalitis, or an inner ear infection (head tilt). Fortunately, the recommended treatment for neurological impairment from any cause usually involves appropriate antibiotics and anti-inflammatories. These may help to reduce the size of a pituitary tumor and temporarily relieve the symptoms, but the treatment is not always successful and the tumor usually progresses.

Other Types of Tumors

Another fairly common tumor in rats is a fibroma. Because these tumors derive from fibrous tissue they are usually quite hard, but they are benign and may be easy to remove. They are most common on the side or back.

Squamous cell carcinoma is another form of malignant cancer in rats. It is reported that this type of tumor is commonly found on the face and should be suspected with any swelling or abscess in this area.

Another very common place for cancers to appear is directly below the ear. These cancers usually appear to be an abscess, and one should suspect any abscess in or around the ear of possibly having a form of cancer underlying. These cancers can arise from the Zymbal's gland. If what appears to be an abscess also contains tiny lumps of white tissue or a soft mass of fibrous tissue instead of pure pus then cancer should also be suspected. These cancers also often bleed severely.

There are also reports of less common tumors such as histiocytic sarcoma. This is a cancer of the immune system. Lymphosarcoma has been reported in the chest, abdomen, and in the skin. Malignant melanoma and liposarcoma have been reported though they are not very common. And in a semi-hairless rat sebaceous epitheliomas have been diagnosed.